The Perfect Fit: How Jonathan Aquino overcame self-doubt and landed a career in a field he is passionate about

Jonathan Aquino is driven to be the best he can be. That much is immediately evident when speaking to the charming 22-year-old, a two-time finalist for this Stenberg’s Student of the Year award. While Cardiology Technology is the perfect career for this caring and conscientious young man, it wasn’t the first program that brought Jonathan to Stenberg College. He first completed the 30-week Medical Laboratory Assistant (MLA) program, graduating with honours in September of 2014. 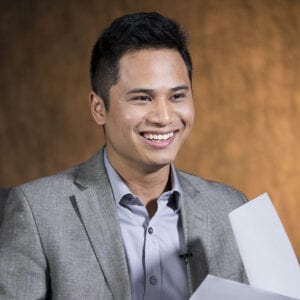 Jonathan graduated in two programs in Stenberg and is now an instructor at the College.

Rising to the top

At 19, Jonathan went into the MLA program as a shy, quiet student who recalls speaking “maybe once or twice” during the first few months of the program and was frightened of needles. Encouraged by his teachers, Jonathan Aquino thrived, and according to instructor Steve Paras, “demonstrated tremendous growth, in regards to both his confidence and his maturity.” After completing the MLA program, being nominated as the MLA Student of the Year finalist, and realizing that his excellent grades proved that his dream of studying medicine was attainable, Jonathan enrolled in Stenberg’s demanding Cardiology Technologist (CAT) program in January of 2015.

Jonathan assumed a leadership role in the program, serving as a Student Council Representative, encouraging his classmates to get involved in the Stenberg community, and tutoring peers who struggled with the course load. “I tried to make every resource available for my classmates so that everyone in the program could do well, but then it started to feel good and helping other people just felt like the right thing to do.” Haeley Horton, an MLA student Jonathan tutored who went on to win the 2015 Student of the Year award, spoke of his dedication, recalling how she would often “see Jonathan in the halls, kindly checking in with other students and offering advice and ideas for upcoming projects. Jonathan has a way with people, and his kindness did not go unnoticed…There is no doubt in my mind that Jonathan will continue his journey and accomplish great things, while making a difference in the lives of the people he comes across.”

Learning the language of heart

For Jonathan, the CAT program was something he had been unknowingly preparing for. “Looking back on it, I think my whole life sort of prepared me for the CAT program. Because when I was in the MLA Program, that’s where I actually learned how to read ECGs, and learned ‘the language of the heart’. In the MLA program, I was challenged by [my instructor] Bal, she wanted me to step out of my bubble and out of my comfort zone and that helped prepare me for the CAT program, and allowed me to believe that I could succeed. During both programs, I think I gained character… Character and confidence too. I was very shy and very unsure of myself, but I think in the CAT program everything that had grown in the MLA program sort of flourished because that’s where I felt like I became a leader; I started voicing my opinion more and represented my cohort on the Student Council.”

Jonathan was also selected as a Stenberg Student Ambassador and appeared in several advertising campaigns, as well as at on-campus events & information sessions. “I always enjoyed speaking at the info sessions because it was a chance to share my Stenberg story, to share how this school has helped me grow as a person and helped me find my way.” He also co-instructed an Anatomy and Physiology course being taught to MLA students during one of the most intense CAT semesters.

Thanks to his strong time management skills, Jonathan was able to balance his responsibilities and earned a 98.4% GPA, the highest GPA ever for a CAT student. In his recommendation letter, Steve Paras wrote that “Jonathan’s most notable accomplishment…was his unique mission to ensure that others in his sphere of influence would be successful…I have not yet seen a student who has so selflessly served others…I have witnessed Jonathan’s tremendous growth, but his compassion for people always came across very clearly…Furthermore, his grades are perhaps the highest on record for each of the programs he completed and is an exceptional individual.”

Never one to rest on his laurels, Jonathan Aquino is now studying full-time at Thompson Rivers University, working towards a Bachelor of Health Sciences. Thanks to an articulation agreement, Jonathan will be able to complete his degree in less than two years and is then considering writing the MCAT exams. “Before Stenberg, becoming a doctor seemed so far out of reach, now I know that my only limit is myself. I can push myself as far as I like, my future is up to me.”