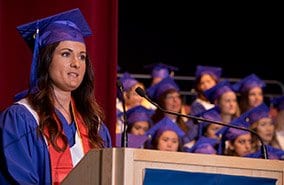 The Indomitable Will of a Mother

“Strength does not come from physical capacity. It comes from an indomitable will.” – Mahatma Gandhi

Haeley Horton exudes a great attitude. After all, she has just graduated with a 94% grade point average and received glowing reviews from her Practice Education sites.

It is clear that she will find great success in her chosen career as a Medical Laboratory Assistant. But if you asked her if she knew that she would be a success, she would tell you something quite different.

In high school, she coasted by, working just hard enough to pass and graduate. She didn’t have any long-term goals and it was her mother who steered her into hairdressing. Her career in the salon didn’t last long as she became a mother and was a dedicated stay-at-home parent to two daughters.

Once her kids were old enough, she started working in restaurants as a server to help pay the bills. But suddenly, her side income became her primary income. Her marriage was falling apart and she realized that she would have to switch to a more stable career to support her daughters.

Her mom would help out with her daughters while she worked during the day, but Haeley knew she had to upgrade her skills to have a more stable career. She also wanted a career that she could be proud of, that her kids and family could be proud of too.

She unexpectedly had to bring her kids to work one day after her childcare fell through. It happened to be St. Patrick’s Day and as Haeley was about to go upstairs to the serving area to
start her shift, she had a realization. “I’m wearing black booty shorts, knee socks and a green vest and my daughters are looking at me and I say, ‘girls, this is why you go to school. This is why.’ I didn’t want that for them. For years they saw me in a relationship that was not very good … Did I make them think they should accept that for themselves? Don’t settle for an unhealthy marriage, don’t settle for a job that doesn’t inspire you. It’s not worth it.”

Drawn to health care, Haeley didn’t think she was a good fit for nursing, but she still wanted to work with patients. She wasn’t squeamish about blood and bodily fluids so she knew being a Medical Laboratory Assistant was for her.

She originally started at another private college, but when she found out that she would very likely be sent out of the Lower Mainland for her practicum, she withdrew in a panic. She couldn’t be separated from her kids for that period and the possibility of her bringing them with her was ruled out.

She called Stenberg College and crossed her fingers that she could get into the next start. Her Program Advisor told her that the class was full, but that there was a chance that she could get a seat. Luck was in Haeley’s favour and she managed to get a coveted seat in the Program.

Haeley credits her instructors Steve and Bal for turning her into a stellar student. She was skeptical anyone could make her a passionate student, but it happened. “Steve was full of energy. He was on point. He told us all, ‘I’m going to make you incredible students.’ I thought, ‘yeah right, we’ll see.’ He even told us about Student of the Year and how you have to get at least 80% and I thought ‘that’s never going to happen, not this girl.’ I was so skeptical.”

As a part of their Orientation and Student Success plan, students have to complete an assessment of their learning style and establish a plan that helps them work through obstacles to their learning. Haeley remembers her assessment, “You write out a paragraph and I wrote, ‘I’ve always struggled, I’ve always been a procrastinator … a just enough person. But I want to do better and I want to do well.” She remembers Steve saying to the class, “you are going to want to get good grades once I’m done with you.”

The class did well in their first class, Medical Terminology, and Haeley got 100%. Steve warned the class that the next course was significantly more difficult and to expect a 10-15% drop in marks.

Haeley was determined to succeed. “Now I’ve got this good grade and now I want to maintain it, I’m addicted.”

After their final exam, the class was waiting outside for Steve to mark their exams. Haeley got a 98%. “I was pretty excited. I only dropped 2% and Steve said to me, ‘just so you know, this is like a Jonathan (last year’s Student of the Year Award Medical Laboratory Assistant Program Finalist) mark. This is incredible. This is up there.’ I was so excited, with tears in my eyes. I was so emotional. He got us through that, he set the bar. I had to get good grades.”

Emerging as a leader

Once Haeley got a taste of academic success, she was hooked on the feeling of accomplishment. She wanted more. She realized that if she applied herself and worked hard, that she would reap the benefits of learning. She pushed herself to succeed – all the while taking care of her daughters and working part-time in the evening.

She didn’t have as flexible of a schedule as her fellow students so when she studied late at night, she had to make it count. A part of her learning strategy was to help others.

She supported her classmates in their studies and could always be counted on for extra help or encouraging words; Haeley discovered that by supporting her peers, she was also aiding her own learning as well. Classmate Ashley Singh shared, “She was also a good teacher. Haeley always helped anyone, including myself, throughout the Program whenever help was needed. When I needed help while I was studying at home, she was just a call away. She found it helpful for herself when she’d teach others, which shows her joy in learning. You don’t come across such helpful classmates like her often; I’m glad I met her at Stenberg.”

Haeley was burning the candle from both ends – between taking care of her kids, school, and work – and there were times when she thought she couldn’t do it. But she had to keep persevering. This wasn’t just for her, it was for her daughters. She wanted to be that role model for them and reinforce how important education is.

Her friend Kimberley Corbett gives us some insight on Haeley’s motivation: “It takes a certain degree of bravery, unknown to most to go back to school in your thirties. You feel washed up against all the young bright faces that are fresh out of some school…and eager to learn more. You feel like there is no tool strong enough to brush away the cobwebs that have taken up residence in your head and are wrapped around your brain. Haeley felt this way. I know firsthand. I got to hear the fear in her voice and the stutter when she wondered if she could do it or not. Then, she would remind herself of the lesson she needed to teach her kids. The one she herself would tell her kids. The one that is the most important we all tell our kids – you can do anything you put your mind to. So she did. She brushed away the cobwebs, balanced a very busy life and made room in her parenting for school.”

Haeley made it seem so effortless, balancing it all – but she knows she could not have done it without the support of her family and friends. “From studying late nights and early mornings, she was committed to getting good grades and succeeded every time. Being a mom of two children and going to school is hard and stressful, but she made it look easy! She was a role model to many students in our cohort,” added Ashley.

Haeley did exceptionally well in class and did just as well on her practicum placements. Her instructor Bal wrote, “The feedback received from her current Practicum has been overwhelmingly positive and encouraging. Some comments made by the site supervisor and preceptors was, ‘You can pay me back over time by working with us’ and ‘I will be writing rave reviews about your performance and practicum because you are awesome.’ Haeley has made a lasting positive impression on her preceptors and they would like nothing more than to have her be part of their team because she has done a phenomenal job of fitting right in. She is thoughtful, kind, and intelligent and a true ambassador to Stenberg College and the Medical Laboratory Assistant Program.”

Haeley has always been self-sufficient and her parents trusted that she would turn out alright. But Haeley didn’t push herself in high school, so her newfound academic dedication was surprising to her and her family.

When Haeley was forced to look survival in the eye – she had to channel her inner strength to succeed; fighting and pushing through even when the challenges were steep. Her friend Gemma Olive commented, “…giving up was never an option for Haeley, I don’t think she knew her own strength until being strong was her only choice. Haeley did not stop there, she desperately wanted to become a role model for her two girls, and to become financially stable to support them and give them a future they deserve. Haeley courageously took a risk into furthering her education in a field that was not only rewarding and of interest to her, but one that she felt passionate about. She imagined it and therefore achieved it. She has truly learned to believe is doing.”

“I gained more confidence for sure. I gained pride. I’m proud of this. It’s changed me…I can do anything I set my mind to. I do believe that now…I’m not embarrassed anymore. As much as I think serving has given me tons and I don’t want to put that down. I can say I’m more than that now. In more ways than just a career. I did something I never thought I could do and did it well. I’ll always have that now.”