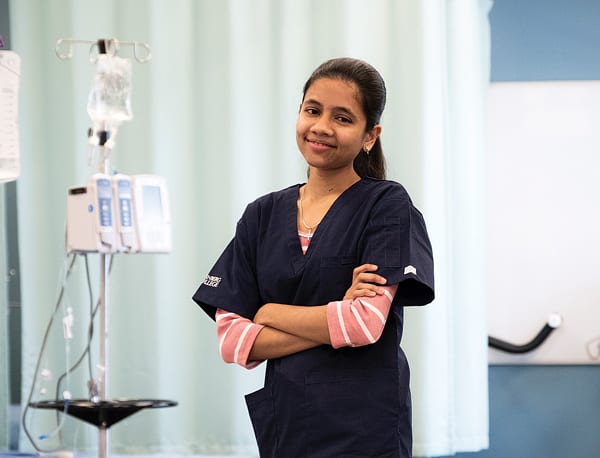 “My first month in Canada was very tough. I’ve never lived alone before and I was trying to cope with this feeling of not having family around while keeping up with my studies,” recalled Student of the Year Finalist for the Health Care Assistant (HCA) Program, Ivane Christian.

“I was working as a nurse but I didn’t feel like that’s all I was meant to be. I felt like I was living someone else’s life. I wanted to try something new.”

Ivane holds a Diploma of Nursing from India and came to the HCA program with four years of nursing experience. When asked what motivated her to start over again as a Health Care Assistant, she said, “I was working as a nurse but I didn’t feel like that’s all I was meant to be. I felt like I was living someone else’s life. I wanted to try something new.”

“I lived alone all year in a rented room and worked part-time to pay for my expenses. My classmates and my instructors were the only people I knew in Canada. They became my support system, and my family.”

It was difficult to make the case for moving to Canada when everything in India was going so well. First, Ivane had to convince her parents and fight the popular mentality. “People back at home thought, ‘You already have such a nice job. Why do you want to leave everything and go?’ But I wanted to achieve something greater. Life didn’t end in that job for me.” Once her parents realized that she was firm in her commitment to moving, they fully supported her. Their support, in turn, made it easier to deal with societal expectations from family, friends and relatives.

A NEW FAMILY IN CANADA

Ivane chose Canada for its world-class education. Her research indicated that education from B.C. is highly beneficial and in demand. She enjoyed the teaching style at Stenberg College. When asked to compare teaching styles in India and Canada, she said she liked both equally even though they were so different. However, she does admit that it was a welcome change to come from large class sizes where the teaching style was predominantly lecture-based to the smaller classes at Stenberg, where teachers are more invested in student learning.

She also took the English as a Second Language (ESL) component of the HCA program to upgrade her language skills. “The classes were very interactive and fun,” she said. “Our ESL instructor was really kind and welcomed us in a positive way. She supported us both inside and outside class.”

Ivane credits her success in the program to her supportive cohort and instructors. “I lived alone all year in a rented room and worked part-time to pay for my expenses. My classmates and my instructors were the only people I knew in Canada. They became my support system, and my family,” she remembered fondly.

“My grandmother was a nurse, and my mother wanted to become a nurse as well. But somehow, it didn’t work out for her. By becoming a nurse, I’m fulfilling my mother’s dream.”

Entering the Canadian workforce can be a challenge for anyone, even if they have several years of work experience in their home country. Ivane embraced this challenge with open arms. To pay for her living expenses, Ivane took a job at the Walmart in New Westminster. Without a car, the commute was an hour long each way but Ivane said it was worth it. “It was different from anything I’d experienced before. It was the first time I’d worked at a store like that but I made friends there and the workplace was fun.”

A FUTURE IN NURSING

Ivane is now quite familiar with the Canadian health care system. The HCA program at Stenberg was only the first step in helping her to achieve her dream. She is currently enrolled in the Nursing Leadership and Management Program at Seneca College in Toronto where she intends to continue pursuing her nursing career. Eventually, she wants to take the National Council Licensure Examination (NCLEX) and work as a Registered Nurse in Canada. When asked about whether she’d want to go back to India or settle in Canada, Ivane is very clear. She exclaimed, “I want to settle down here and sponsor my parents so that they can come live with me!”

Although it may seem like she’s breaking from traditional roles and societal expectations, Ivane has upheld the tradition of her family differently. Ivane stated, “My grandmother was a nurse, and my mother wanted to become a nurse as well. But somehow, it didn’t work out for her. By becoming a nurse, I’m fulfilling my mother’s dream.”

By following in the footsteps of her family, she’s reimagining tradition and redefining it her way. ❉