“The Counselling Therapist program has given me tools I can use for myself. And I have. They are tools I can share with my clients. They’ve helped me learn that my past does not define me. It is part of my story but I am who I choose to become.” 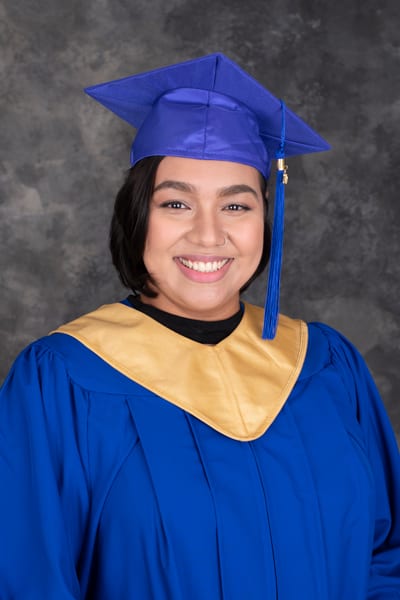 V in her Student of the Year gown at graduation.

Today, Vandhana Plestid is a different person than she was before starting the Counselling Therapist Private Practice Diploma program two years ago. She is someone who supports others by walking with them, not for them. Someone who confidently shares her true self with the world. Someone who built herself into a person she’s proud of, “scars and all”.

Vandhana, or V, as she is commonly known, spent her early years in Fiji. She fondly recalls her childhood, “Life was amazing. I enjoyed all kinds of freedoms. I had supportive, protective parents and my whole family around me. Everything was familiar. Everything was safe.”

For V, Fiji was home. When her family moved to Canada in search of a better life, everything turned upside down. “Canada was brand new and quite honestly, terrifying. The safety I had known in Fiji wasn’t here. Everything became a threat to me.”

“I had given myself this huge pressure to gain some sort of prestige. So, I went for nursing.”

She didn’t know it at the time but V had entered survival mode. Unable to understand the racism and bullying she faced, V felt like an outcast and subconsciously decided to protect herself. V hid her personality from her classmates, friends, and teachers. After all, if she hid, there would be nothing for others to pick on. She built a wall.

THE WALL STARTS TO CRUMBLE

When Vandhana was eleven years old, something changed. As a feeling of safety built in the classroom, V began to let the wall crumble a little bit. “The safety my teachers and classmates created allowed my confident self to come out, or at least the illusion of confidence.” 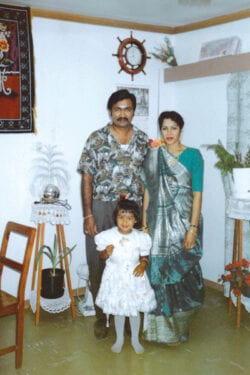 V with her parents, her protectors, in Fiji.

V let parts of her personality surface in a very controlled manner. With the cadence of someone who has done much soul-searching and self-reflection, V continued, “I was secure in the areas I felt comfortable in, so I could be confident in certain things. I stayed away from everything else. For example, I didn’t play sports because I didn’t feel capable. Instead, I concentrated on academics because I knew I could excel.”

Only indulging in aspects of herself she knew were safe, V focused her efforts on school and a couple of close friendships. In these realms, she was a force. Whatever V focused on, it was her mission to be the best, approaching everything with 200%. As for everything else, she hid behind the illusion of someone who did not want a relationship. Who did not want a big group of friends. Who did not need any of that to be a success. She kept everyone at a safe distance so she could appear strong, and not someone who feared failure or the unknown.

“Canada was brand new and quite honestly, terrifying. The safety I had known in Fiji wasn’t here. Everything became a threat to me.”

V put on such a good act, even she did not realize she wanted these things. V stated simply, “I built such a perfect mask that no one knew the real me.” 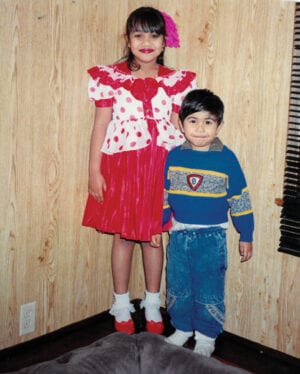 V with one of her brothers before moving to Canada.

A NEED TO SUCCEED

Driven by the comforts of what came naturally to her and a desire to be the best, V faced a choice after graduating high school. She sought prestige and decided a career as a Licensed Practical Nurse would provide it. She explained, “I gave myself this job to be an academic success. Grade 11 and 12 were scary because I had to figure out what to do for the rest of my life. I had given myself this huge pressure to gain some sort of prestige. So, I went for nursing.”

V liked nursing. It was an esteemed career, it was hard work, and it fulfilled an important role in society. But most importantly, it allowed V to focus on other’s pain instead of her own.

CHANGE ON THE HORIZON

As you can imagine, V put her heart and soul into the career. She worked tirelessly to heal her patients, losing herself in the job. However, trusting no one, burying your personality in your work, and caring for others is exhausting. When she heard about a free counselling workshop Stenberg was hosting called “Compassion, Fatigue and Burnout – The Real Cost of People Helping”, V signed up immediately, seeking coping strategies. Instead, she found something she didn’t know she was looking for.

Four workshops later, V was sold. “Something clicked. I realized there was more I could do. This was the missing piece,” V said. “It felt like a no-brainer to make an appointment with a Program Advisor. Stenberg’s Counselling Therapist program was so highly regarded. I made my decision in three days.”

When V started the Counselling Therapist program, she employed the same strategy she always had – complete dedication. She recalled, “I’m very ambitious and determined, which can be my downfall. For the first eight months, I worked full-time plus overtime, attended school full-time and drove three hours a day.”

She joined the student council, worked at Stenberg events, and became a student blogger. V did it all. But the most important thing V did during her time at Stenberg was change. Wanting to help others, she quickly learned she could only succeed if she first helped herself. “You can only lead someone as far as you’ve gone,” Vandhana explained.

“I knew who I wanted to be but didn’t want to face the weakness I saw in myself, so I never looked. Now I have to because if I don’t, how can I expect my clients to look at themselves?”

V scaled back her nursing hours and delved into herself. For the first time, Vandhana began a reflection process and embarked on a journey of self-discovery. V met her true self, someone she last saw when she was six. The self that hid behind success, work, and school. The self she now loves and accepts. Although it was worth the effort, the process was not easy.

“About four months into the program I trusted my classmates and shared things I never thought I would,” V described smiling. “Knowing they wouldn’t mock me gave me the courage I needed. I made up my mind to put myself first, and from the broken pieces of the person behind the mask, I would build somebody I could show the world, scars and all.” And she did.

It took time and some personal counselling sessions, but she did it. A life-changing moment V attributes to who she is today stems from a question her counsellor asked. “She asked something that shook the foundation I stood on. She asked, ‘Why don’t you feel you deserve to be happy?’ I didn’t have an answer. I was stunned. For the next week, I thought and thought, until I realized I was punishing myself and that wasn’t fair. I forgave myself.” 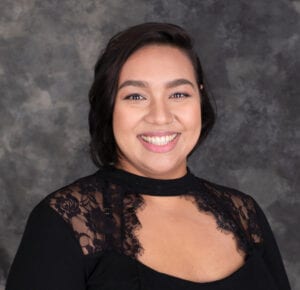 Counselling Therapist graduate, V is excited for what the future may hold.

When asked how she feels she did in the program, V said confidently, “I’ve accomplished what I needed. My goal was to be a success but my definition of success changed over the last two years. Now being a success is being somebody who others can connect with, somebody who can provide safety for someone else.”

V also redefined failure. “The word ‘failure’ has turned into, ‘I’ve learned from this’.”

Her instructor, Christina Savage, also sees V as a great success. “Vandhana has many talents and is passionate about working with people because she too knows what it’s like to need support. She has overcome many obstacles since immigrating to Canada and each day works hard to make a positive difference in someone’s life.”

With excitement in her eyes and a hopeful smile, V shared her eagerness to begin her career in Counselling. “I want to work with healthcare professionals and help the healers. With my nursing background and counselling training, I’m in this really cool place where I can provide safety and understanding to a nurse. I’ve walked those brutal night shifts and understand the pain of losing a patient for the first time. I’ve been there and now I have the tools to help.”

DUST AT HER FEET

Today, Vandhana has a fierce loyalty to herself. The wall that once barricaded the outside world from seeing through now sits as a pile of dust at her feet. V learned to rein in her determination to use as a tool rather than something to hide behind, how to put herself first, and perhaps most importantly, that the world is not as dangerous as she once thought.

Today, V looks different than she did two years ago. She looks older in the sense that she stands taller, with confidence in herself. Vandhana can now say, “I am the child of immigrant parents who suffered, was protected, learned, grew, and now stands in front of you with compassion and the power to stand up tall and say, ‘I deserve, and so do you.’” ❉