“Back in India if you’re 30 and starting over, you’re done,” Pankaj’s eyes welled up as he narrated his struggles after immigrating to Canada. For someone like Pankaj who has a Master’s in Science and had a well-paying job in the pharmaceutical industry, starting from scratch would be an uphill battle. But Pankaj was ready to take on any challenge. 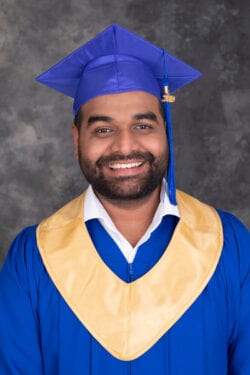 Less than a month after his arrival in Canada, Pankaj had to unlearn all he had known and adapt to his new situation. “It was a big change for me. I was working in my lab back in India on March 30 and by mid-April I was working at a gas station in Abbotsford,” Pankaj narrated. In his first two years of being in Canada, Pankaj had many odd jobs. From selling cigarettes at a gas station to selling furniture and even unloading trailers and delivery trucks, he did what came his way. With every odd job he did, he felt a jab at his self-esteem.

It was hard and Pankaj had his moments of self-doubt but there was one voice that kept him going – his wife.

While an ordinary person would give up and become complacent, Pankaj knew he wanted to do better. The initial couple of months were tough for Pankaj and the only thing that inspired him was the constant support and faith of his wife, Amanpreet. It was Amanpreet, a Licensed Practical Nurse, who suggested Pankaj become a Regulated Pharmacy Technician after learning about it from her co-worker. It was relevant to his past education and in a field he loved.

Pankaj recalled with excitement the moment he discovered Stenberg College. “I didn’t want to go back to college for too long because I already had my masters. When I learned the Pharmacy Technician program at Stenberg was short-term, I knew it worked for me!” Together, Pankaj and his wife researched it, attended an information session and decided this was his path. Although it wasn’t entirely what he had done before, it connected to Pankaj’s past career and would provide more security and stability than the odd jobs he was doing at the time. 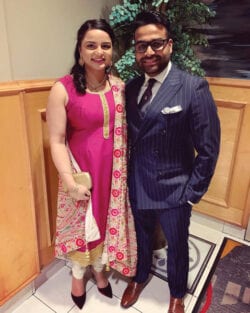 Without any further delays, Pankaj enrolled in the in-class format of the Pharmacy Technician program while continuing to work as an early morning unloader from 4:30 a.m. to 9:00 a.m. It was hard and Pankaj had his moments of self-doubt but there was one voice that kept him going – his wife. “When I started this course, I was confused. I had to remember every drug name. A month or so into the program, I told my wife ‘I don’t think I can remember it.’ But she supported me and told me, ‘You can do it.’ Her faith in me helped me overcome any confusing thoughts and to keep at it,” Pankaj credited his achievement in the Pharmacy Technician program to Amanpreet.

“I didn’t want to go back to college for too long because I already had my masters. When I learned the Pharmacy Technician program at Stenberg was short-term, I knew it worked for me!”

As a mature student, Pankaj realized he wasn’t alone in the struggle. His classmates had their own hurdles to overcome and he tried his best to support them and pay it forward. His optimism rubbed off on his cohort and was noticed by his instructors. Rapinder Chahal, Pharmacy Technician In-Class Program Coordinator and Instructor, noted, “Pankaj was a leader in this class. He made students, and his instructors, laugh when it became stressful and overwhelming. His positive attitude, caring nature and proactive manner was contagious to his classmates. He helped students who were struggling in comprehending the material.” Even commuting from Abbotsford to Surrey in bad weather to attend class could not dampen Pankaj’s determination to succeed. 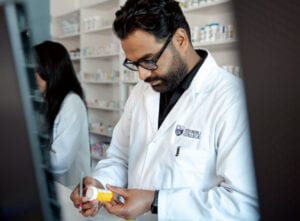 Pankaj’s optimism and proactive nature inspired his classmates and instructors.

The most exciting part of the program for Pankaj was the hands-on experience of learning during practicums. After all, that was what he had set out to do. Pankaj finished his practicums with flying colors and was ready to take on the world of Pharmacy. He interviewed at his chosen places and received multiple job offers. “I received offers from various community pharmacies who were ready to hire me and support me through my Structured Practical Training (SPT), which is one of the steps to become regulated.” Being a new dad, Pankaj picked what worked for him the best. He’s currently working at a community pharmacy five minutes away from home, which allows him to be closer to his three-month old baby girl.

“Pankaj was a leader in this class. He made students, and his instructors, laugh when it became stressful and overwhelming.”

Life’s finally turned a corner for Pankaj and he’s proud to be where he is today. His piece of advice for someone in his shoes confused about starting over, “It’s worth it.” ❉