There’s no shortcut to success – Anthony Generoso, Licensed Optician, is a living example. It’s taken Anthony, whose pet name is Ton-Ton, 14 years to realize the Canadian dream that his family could barely imagine way back in 2003. He made his dreams a reality when he added the designation of Licensed Optician after his name in 2017.

The confident and charismatic Anthony we see today is a result of a lot of hard work. He was in third year of Electronics and Communications Engineering degree at the University of Santo Tomas in the Philippines when his parents decided to immigrate to Canada with hopes of building a better life for him and his two siblings. 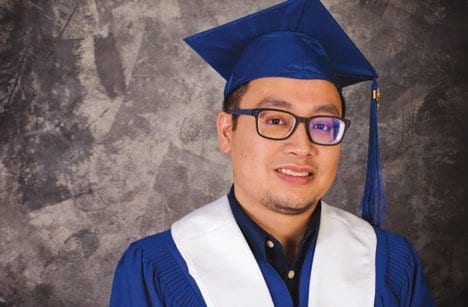 They left everything behind – their jobs, education, home, and even some of their loved ones. Anthony had to say goodbye to the love of his life, Angela (El for short). Before he left, Anthony made a promise to Angela. “I told her, ‘we’ll write love letters.’” The two continued their relationship over the phone.

Anthony settled into a new way of life with his family. “Five of us were working at the same time. Our target was getting a house. It’s incredibly hard to buy a house and settle down but it’s a part of that Canadian dream: you get a house, you buy a car… All of us worked together and within a year and a half we bought our very first house!”

To help with the purchase, Anthony, once an aspiring engineering student, worked at a home improvement store. He burned the midnight oil stacking shelves with tools, selling hardware and flooring supplies, and always going above and beyond. At the same time, afraid he might lose Angela, Anthony put down the phone, got on a plane and asked her to marry him. In 2012, after almost a decade of emails and phone calls, Ton-Ton married El.

After his marriage, Anthony continued to work at the home improvement store to help support his family. However, after 13 years he wanted more … While cutting blinds for a customer, his thick glasses worn out from years of wear, kept slipping off his nose. The customer noticed and advised him to purchase new frames. Anthony asked him how he knew so much about glasses. The customer replied, “‘I’m a Licensed Optician.” Anthony’s interest was sparked and he decided to learn more about the field.

After a week of research, Anthony enrolled in the Licensed Optician Diploma program at Stenberg College. It wasn’t easy for the 32-year-old newlywed to make this decision but he persevered with hard work and a positive attitude being his mantra. Intent on continuing to contribute to his family, Anthony worked 40 hours a week at the home improvement store while studying to become a Licensed Optician. As soon as he started the program, Anthony noticed a change. “I felt free and more confident. The program made a big difference in me. The day I started, I could see the different doors opening up for my future.” For the former engineering student, highlights of the program were the labs and undergoing hands-on training under the supervision of industry professionals. He started his practicum at IRIS and was offered a job before completing the program.

His manager, Charissa Moyen said Anthony “hit the ground running… Anthony has exceptional people skills and easily accommodates all different types of personalities regardless of age or culture. His professional demeanor and friendly nature makes him well-liked by both staff and patients here at IRIS.”

Six months after completing the program, Anthony wrote the National Association of Canadian Optician Regulators (NACOR) licensing exam. “It took two months for me to get the exam results. I was at IRIS and my wife called and said, ‘You have a letter from NACOR.’” Anthony’s face lights up as he shares this anecdote. He urged El to not open the letter and wait for him to come home. “I got home at around 10:30 p.m. as I was working double shifts. I took my time, changed into pyjamas and picked up the letter. It seemed heavy. I opened it and read ‘Congratulations, you passed the licensing exam!’”

Anthony’s blissfully climbing up the ladder of success one rung at a time. “Now, I’m a Licensed Optician. Everything seems to be falling into place and I’m really happy I took the program.” He has fulfilled his ambition to gain an education and a professional designation and now he’s looking forward to building a successful career as a Licensed Optician and to the arrival of his first child. Life is good for Ton-Ton and El.